Posted on June 2, 2017 by dkatiepowellart

Growing up in Southern California, the home of the automobile,
I remember fondly this emblem as a kid!

The Texaco Fire Chief Banner was in excellent condition, but dirty and creased.
The back appeared to have been dropped into dirt, and creased areas were
especially dirty with brown to charcoal marks, and in two places, what appeared to be
very old light shoe prints walking across charcoal on the back. 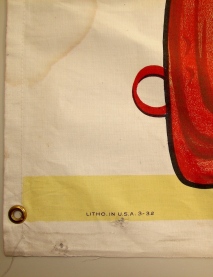 Our first step was to test for two issues, test images above:
Are the banner’s prints colors likely to move?
Will the various types of dirt move?

This banner was meant to hang outside, so water moving color was not an anticipated problem.  However, we were concerned about the printed color moving with various cleansers, and as some of the black grime appeared to be grease, we might need a cleanser.

Always we start with deionized water, and it is surprising what moves with patience and soaking, along with light movements to loosen the surface diet.  A good deal of dirt loosened in the test, with little movement of a soft brush or sponge.

We tested a surfactant and a mild detergent meant for textiles.
Neither moved color, however, as we moved through the cleaning, neither moved the dirt any better than the deionized water with two exceptions.

Most of the dirt on the banner was surface, meaning it was sitting on top of the canvas.  Surface dirt can be seen in a magnifying glass, and it also looks more dusty, to use a layman’s terms, than runny or wet.

There are still safety issues with removing surface dirt,
especially as the worst dirt was on the back side.
If it was gotten too wet the fear was it would transfer through the canvas
onto the front side, and not knowing what it was, but seeing a half-dozen stains,
we did not want to chance it spreading and staining.
A damp sponge and patience wicked quite a lot of surface dirt off
first the back side, then the front, allowing me to then go a bit
deeper in wetting areas to see what happened to the stains.
Rubbing of any kind was out of the question except with soft tools in
extremely filthy spots on the unprinted canvas in good condition (no rips or wear spots.) 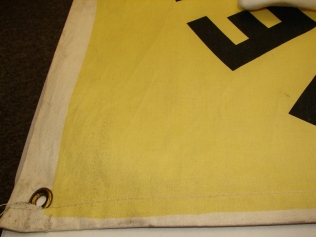 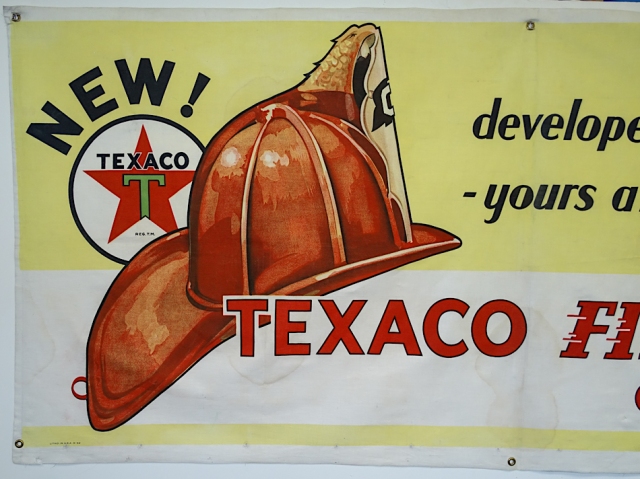 I am happy to report a good amount of success,
and no losses except the 1/8-inch area I tested, and will never reveal! 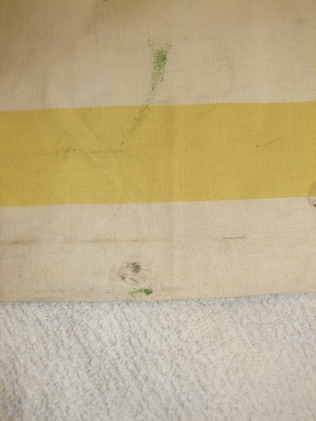 Some stains would not move at all.

One was a mysterious green mark,
above, and also present to a larger degree on the back.
It looked a bit like crayon, and we did no chemical tests,
which are generally not used in private collections;
I believe it is paint, which textured like crayon as it moved across the canvas.
The other are the half-dozen large runny spots.
Perhaps they lightened a tiny bit, but I cannot tell, and they still are,
disappointingly, large and there for all the world.
They appear to have happened when the banner was folded,
as almost all fall on crease lines.  Perhaps a ceiling drip, which comes through with
wet dirt and whatever materials are in the roof/ceiling structure.

A final cleaning was full submersion, a light soak and then gentle manipulation.
This last bit removed almost all the last of the dirt,  and brightened the whole banner!
Hanging to air dry took out many of the old creases, however,
another oddity was that while we were able to iron the banner,
a couple of creases would not release! 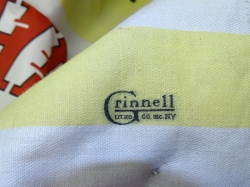