Posted on October 23, 2017 by dkatiepowellart

This Victorian firescreen, circa 1890-1910, is a family heirloom,
created from petitpoint, needlepoint, and cross-stitching, quite lovely when new.
Originally it might have attached to a wooden or metal stand,
standing in front of a fireplace to shield the family from too much direct heat.

It came to us after years of hanging uncovered in rooms with wood smoke,
oil smoke, and a cigarette smoker, all of which contributed to the the overall feeling of grime and brittle texture of the textile’s linen grid, or warp and weft.
The family wanted it cleaned and infilled with new yarns, readying it for life under glass.

Before proceeding, we test cleaned the lower right-hand corner, in an area which was likely to be removed due to excessive holes in the tapestry which were the most expensive areas to be treated, and the most unremarkable area on the textile.

The test went well, the dyes stayed in place with minor migration,
and as you can see, tar released onto the paper towels.  It was safe to proceed, above.

We vacuumed the piece gently with textile attachments to remove surface debris,
then cleaned the entire textile with several rounds of short soaking
in a mild surfactant solution, and removed layers of grease and grime,
rendering the textile to a brighter color than it was before cleaning.

At this point, as per our agreement with our client, we reassessed the piece, and offered our final estimate with various approaches.  Our client decided to eventually remove or hide the bottom band and so did not conserve or restore that area.

The textile was created with wool and silk yarns on a linen grid.
After finding suitable matches for the yarns/threads, Kate began stabilizing the woolen edges, which were the sturdiest part of the tapestry, above. 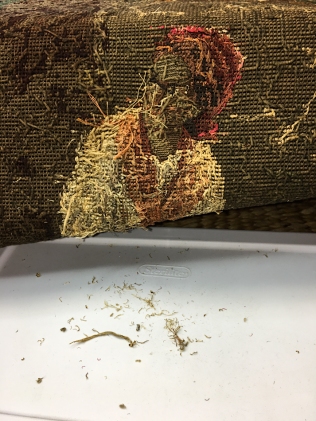 However, as she moved into the silk thread areas she discovered a surprise:
the silk threads were sheered yet had not dropped out of the grid during cleaning, as has happened on other projects!  Now if any adjacent areas were infilled,
the other stitches literally dropped, above, when touched.
What might have been a simpler infill of stitches here and there
and a small area on a sleeve, became large swaths of stitching infill! 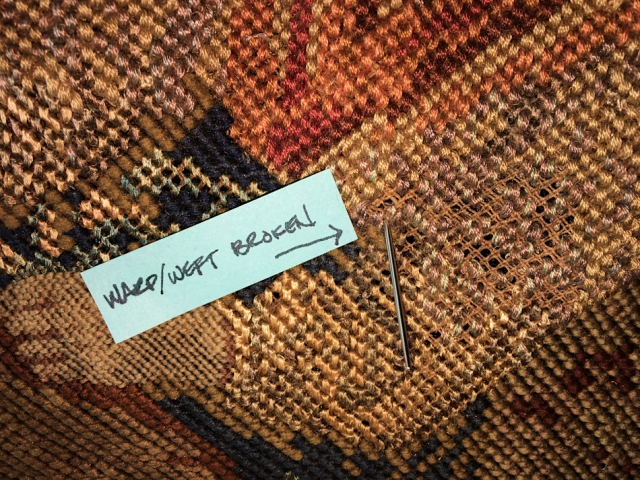 There were no huge areas where the grid, or linen warp and weft,
needed to be completely rewoven, which is good considering the fragility of the tapestry.
Instead there were 21 areas of 2-4 places of broken warp/weft, and two where there were holes created by 4-6 broken linen threads.  The adjacent grid could not take reweaving easily, and so the areas were cleverly infilled with the needlepoint.

Also, the grid was too fragile for cross-stitching, which meant double the number
of times a needle would pass in each hole, threatening to pop more linen threads, and so Kate chose to infill using a needlepoint stitch gently pulled, not tightly pulled. 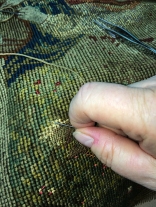 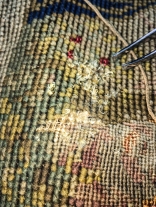 In each area, cut silk threads were gently lifted using a dull-tipped needle, then picked up with tweezers and vacuumed before the new stitching began, above.

The factors that seem to have lead to the cut silk threads are the combination of heat and smoke the piece was subject to over a century, combined with the sturdiness of the wool next to the silk thread.  Overtime, the wool pulled gently on the brittle silk.

While Kate was not hired to infill the lower area that would be covered,
she did give our client a bit of free time because the line across where the piece
might be cut or turned under needed stabilization.  Kate did not take the time
to color match the green-golds in that bottom band.

As part of the documentation bits of the historic fibers are placed into
document bags.  In addition, extra bits of the threads used were also
given to our client in case a small bit was necessary. 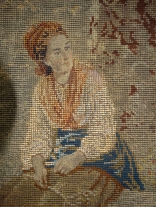 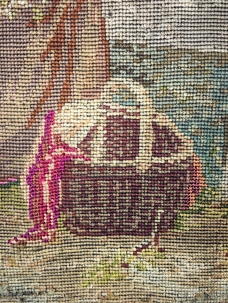 This is not a museum object, which if it were, might be approached a bit differently.
The truth of the historic fiber colors would have yielded a garish contrast to
the now faded threads if Kate matched the threads she found buried on the back our client’s textile.  Instead, she choose to strike a balance, knowing that the piece was
once a vibrant rendition of a woman sitting under a canopy of trees and possibly an arbor, on a bench, with a bright picnic spread ready to share.  It has pink, red, turquoise, bright blue, and brilliant red-golds in the figures under vibrant green trees.  Kate choose a warmer, darker version of the Autumn colors, and browned versions of the
pink and red, in order to create a pleasing piece for the family. 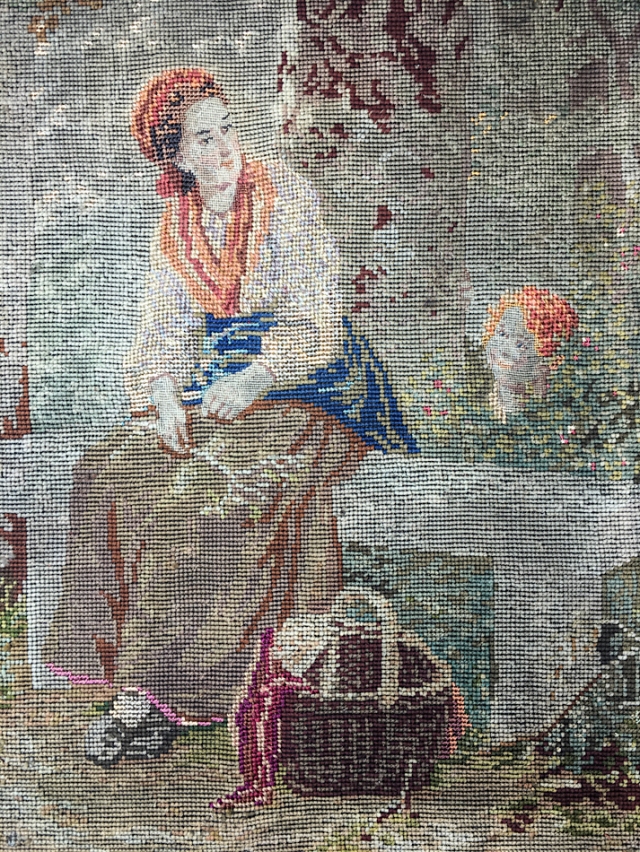 The textile is ready for the next leg of the journey, which is framing to preserve the work done and the tapestry,framed by Deann Holtz, who trained in proper textile framing.