Repairing Veneer on a Bombe in the Style of Louis XV

Posted on June 1, 2014 by dkatiepowellart 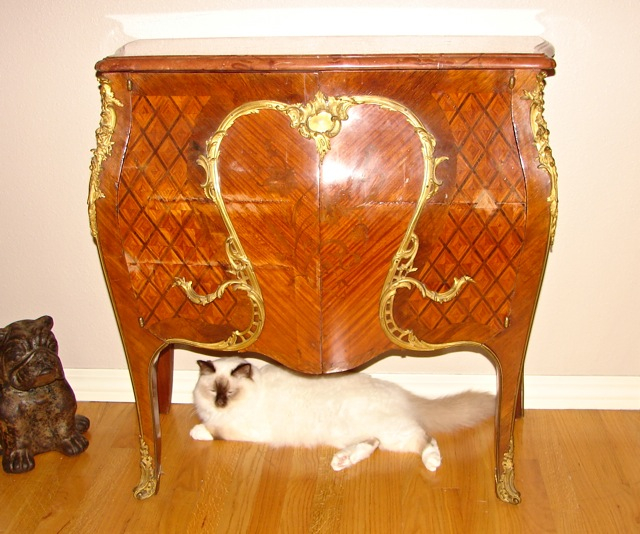 Before Repair, Above, and After, Below.

This is a lovely bombe which had cracked veneer across the curved door faces.  Someone had previously repaired it long before our current owners took possession.  MPFC treated several areas, but I am posting one area of restoration to the large triangular area on the right-facing door so you can see the process.

Before, white paint drips, faded areas, evident epoxy from a prior repair, lifted and frayed veneer.

After, dark line was mitigated, epoxy “pink” is not evident, color well matched even close-up, the true test.

Things we discovered in working closely with the veneer:

We cleaned the veneer using naphtha, and removed the white paint that was splattered across the front.  The pink composite/epoxy previously used was carefully smoothed, and where possible, was reduced to the elevation of the historic veneer.  Also, veneer edges had tented, splintered and feathered; and in those cases 600 grit (VERY smooth) was used to carefully reduce the feathering so no tears could occur.

The triangle inlay is one area which exhibited almost every issue we faced on this piece.  Notice all the bleached areas along the crack, and also on the “X”?  After sanding to accept shellac with 600, and the feathering completed, it was again cleaned with naphtha.  Two clear coats of beige and Siam seed shellac were applied.  Once sealed, it became apparent that a dye must be mixed utilized to carefully mitigate the color shifts.

Cleaned and ready to begin. 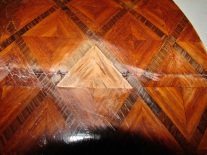 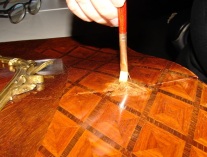 Two shellac dyes were used, one a Van Dyke brown, the other a warm Sienna brown (my names for them).  The dyes were added to the shellac.  The Van Dyke brown was used on the “X”, the Sienna used on the field, and then occasionally a bit was mixed in any given area for a varied appearance.  I did not want the final repaired area to jump out; however, due to the dark stained areas there was no way to completely cover the old repair — so we mitigate the dark areas by fooling the eye.  I did not try to match the depth of color, because that can cause a brightness in a finish that appears new from across the room.  Better to stay just a shade lighter.

Again, I sanded lightly to begin a new day of shellacking, below.  Then the rest of the images are successive build-up shots, six rounds in a long day, the two end coats of beige shellac so that when I have to sand again I won’t remove a dye.  It was not completed, but getting there!

Begin many coats to build color . . . 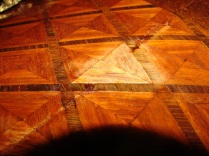 Here I worked with the Sienna with a teeny brush. . .

Here I worked on the Van Dyke Brown with a teeny brush. . . 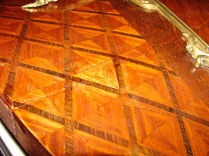 The finish becomes slightly darker with each coat.

After basic treatment, no top coats or final polishing.

Before delivery, a few more coats of clear beige shellac were added in various areas to mitigate other problems, then the piece was polished and waxed.

©MPF Conservation.  May be printed for your own use.
May be reposted if our url +copyright is used as reference.