Posted on December 7, 2015 by dkatiepowellart

This is part of a series for Restore Oregon

by one of our partners, Kate Powell (artist too, bio below!)

Thanks to Drew Nasto, Craig Powell, and for the various locations for allowing me to use historic images to place into sketch format to commemorate the projects!

Kate is sketching many of Oregon’s Most Endangered Places
for 2016 in a folded journal. The following locations are shown in this set:
the Rivoli Theater; the Jantzen Beach Carousel; the Wong Laundry Building;
the Chateau at the Oregon Caves NM; and the Fort Rock Homestead Museum.

Each place is shown below: 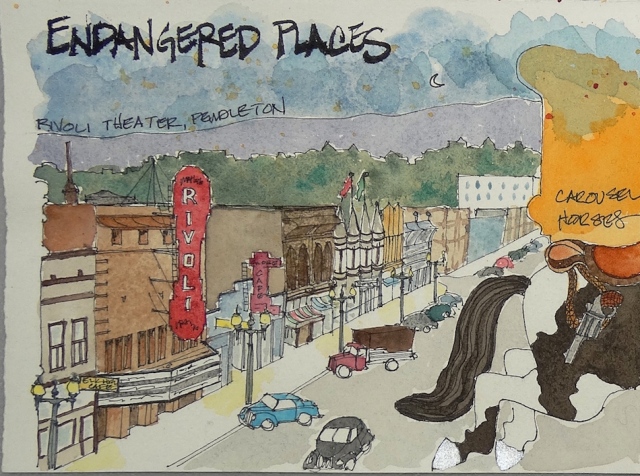 The Rivoli Theater was built as a brick commercial storefront in 1900.
It opened as a theater in 1922, and became an important gathering and entertainment center in downtown Pendleton. Vaudeville and silent movies and talking Hollywood films played into the 1940s. Television’s popularity in the 1950’s took a toll on the Rivoli,
but there are now plans to turn it into a cultural center once again.

The  images were mostly in black and white or sepia tones;
Kate played with color and using the teeny color images as reference!
The photograph used was taken possibly over a roof line, and the edges of signs were her stopping point, and they played well into the edge of the horses tail and feet.

The Jantzen Beach Carousel layout was also invented from many images,
both  historical and from newspapers and blog posts.

The carousel was built by the Charles Wallace Parker Company in Leavenworth, Kansas,  in 1921. C.W. Parker, the “American Amusement King,” built only three or four carousels the size of the Jantzen Beach Carousel.  It lived for a short time in California before moving to the amusement park built by the swimsuit family in 1927.  The horses are spectacular, and many were hand-carved by inmates of the Leavenworth Penitentiary. The amusement park’s popularity peaked during the 1940s, and it was largely dismantled, but the merry-go-round was in use until recently.  Portlanders have fond memories of the carousels, and when posting updates to friends, many remember riding the horses or have memories of their parents talking about trips to visit the horses on the merry-go-round.  Kate had no images showing the colors on the outside of the carousel.

The Merry-Go-Round is no longer present on site.  Restore Oregon is working with local partners to find strategy to restore and relocate. So many photographs have been taken of the exterior horses it was easy to sketch her horse.   She chose to draw the horse she would want to ride!  Kate hopes to do so someday — she loves merry-go-rounds!

The Wong Laundry Building, located at 239 N.W. Third Ave, Portland,
was built in 1908 by Alexander Ewart.  It is symbolic of immigrant struggles and work ethic in Portland’s Chinatown and Nihonmachi, or Japan-town.  Vacant and water-damaged since a fire in 1970, members of the community hope to restore it
as a combined commercial space, event space, and interactive museum.
Kate guessed at the colors, looking to the current buildings in Chinatown for clues.

The six-story Chateau at the Oregon Caves NM was built in 1934.
It has been featured in the Great Lodges of the National Parks, and is part of a larger development that includes a chalet, several employee and rental cottages, and a visitor’s center, all under consideration for National Register status as part of a district.
The buildings were all constructed between 1923 and 1941.  The Chateau is the most outstanding of these structures.  The building also holds one of the largest collections of Mason Monterey furniture, also in need of expert conservation.

MPF Conservation has a long history with the Chateau at the Oregon Caves NM.
Having treated thirty pieces of Mason Monterey furniture and having lived nearby for many years, we know and love the Chateau.  The image of the decks (destroyed by snow loads) was a black and white historical photo, and Kate laid color in as we know it.

The A-frame chair shown is the one surviving historic A-frame which survived the flood of 1964, probably because a guest had taken it from the dining room to their bedroom.
MPF Conservation used the lovely A-frame as the model for the design of the stripped broken A-frames, and did diligence to determine the colors used on the others.
We repaired the original, and it is now part of the museum collection.
Kate used the chair to balance the horse in the layout. 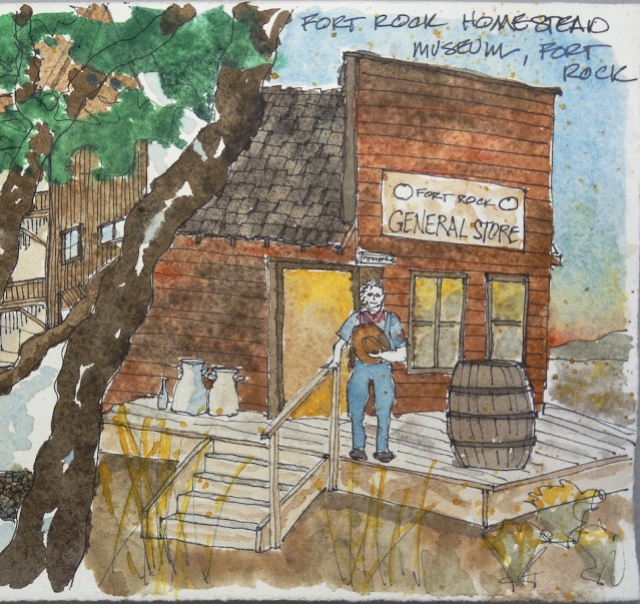 Located in Fort Rock, Oregon, the Fort Rock Homestead Museum image derives
from Craig Powell’s photograph.  The Fort Rock Valley Historical Society conceived
and promoted the development of a homestead museum to preserve the
Fort Rock Valley’s pioneer heritage. As a result of the society’s efforts, the
Fort Rock Valley Historical Homestead Museum was opened in 1988.
It is a collection of original homestead era buildings assembled in a village setting, including the Fort Rock General Store.  Most of the buildings contain historic items used by local homesteaders including furniture, dishes, household products, and tools.

I agree to Creative Commons Attribution-Non-Commercial 4.0 International License, which you can learn more about by visiting the site, or,
visit my web page for a more user-friendly summary on my terms.
My images/blog posts may be reposted; please link back to dkatiepowellart.
Photographic images by known photographers Drew Nasto and Craig Powell.