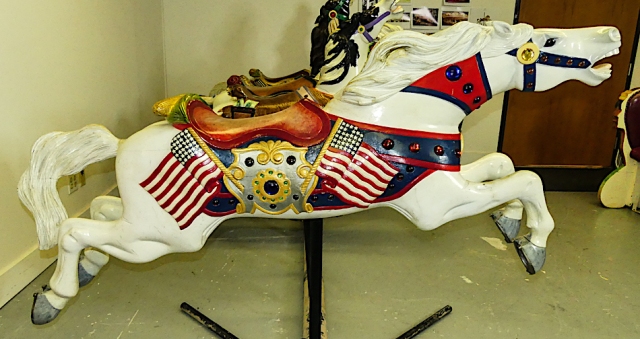 Our White Patriotic Jumper had repairs to be made on the tail,
the tail-to-leg connection, all four legs, and his belly.
When these repairs were completed, we could treat surface repairs and finish.

The White Patriotic Jumper is a sample treatment,
so our client, Restore Oregon,
can see the process from start to finish!

We began our documentation with the tail.
MPFC’s goal, relative to the tail, was to restore the tail into working condition
as well as reestablish the tail’s joinery components (as Parker originally had intended, wherever possible) to allow for future  repairs without the aid of
technical woodworking skills by future maintenance staff.
A guideline for these repairs will be created by MPFC for the edification and guidance
of future JBC  maintenance staff to ease the efforts of maintenance and
holistic preservation of the historic carousel horse’s various components.

Note that a lot of explanations are under the images themselves! 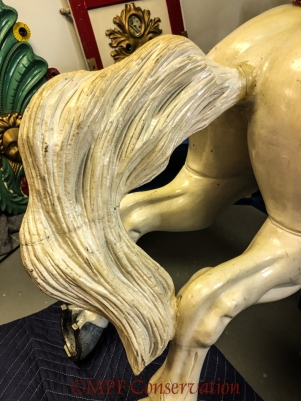 The tail had three distinct repairs to be made before it could be reassembled:
tail to rump, a tail break midway in the tail,
and the tail-to-leg connection.  We will cover these in three parts.
The repairs were performed separately over time.
We began with the Tail-To-Rump connection, and outline the tail
tenon and mortise repairs (Part I, below).  The tail break itself is Part II.
Finally, the Tail-to-Knee connection, Part III.  We documented them separately
until we came to fitting the tail back together again, during the painting posts!

The tail tenon is not a separate dowel inserted into the carved tail proper and into the mortise of the body of the horse, but a tenon which has been formed out of the tail stock. This is important because this allows us to move directly toward restoration
of the components rather than taking risky steps toward an attempt to remove doweling from the tail proper. One less risky procedure! 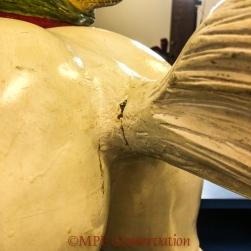 Tail is covered in putties of unknown origin. 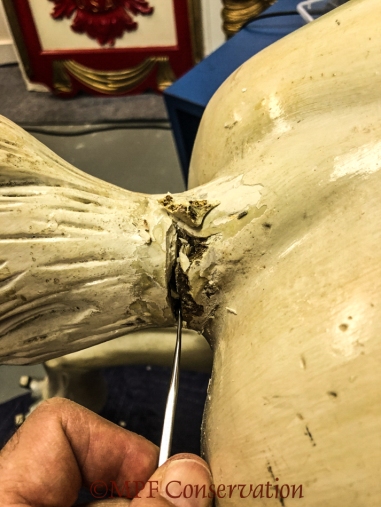 Looking for screws and nails

Screw through mortice and tail tenon 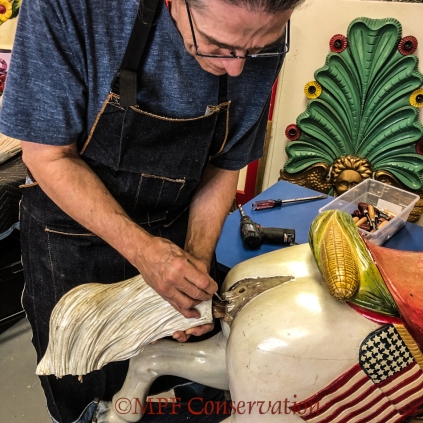 But as the tail is gently pulled, hidden nails lock in… 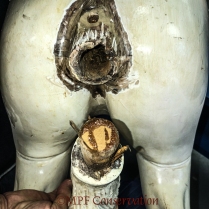 When the tail releases, three large nails are left 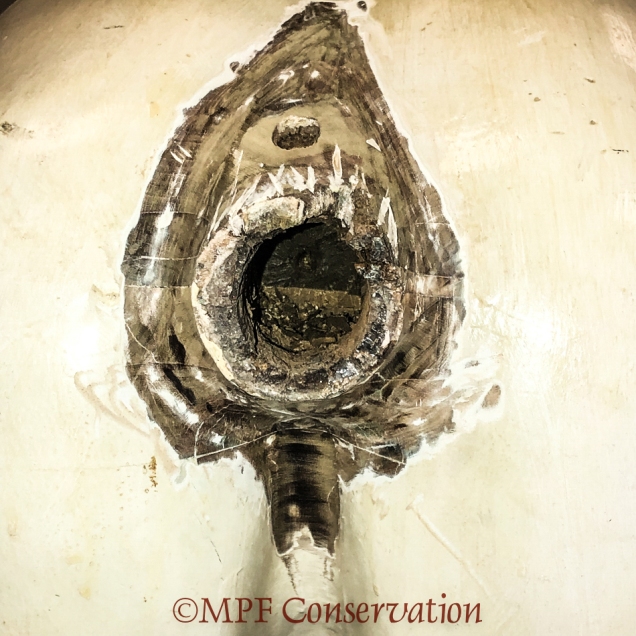 The mortice walls are degraded and full of debris

First we removed the tail tenon from the rump mortise.

The removal of the tail presented difficulties during the extraction process
because of the “toe-nailing” of bisecting finish nails which penetrated the walls of the mortise, acting as sharp splines which grazed the walls and splintered
the rump’s tulip poplar wood substrate.

The screw through both mortise and tail tenon, shown in images 3-6 above,
was the easiest part of the excavation.  The hidden nails, later repairs, caused many issues.
As the tail was gently pulled, images 7-10, above, hidden nails locked in!  The tail tenon was gradually coaxed from the mortise using steady backward pressure.
When the tail released, three large nails were left — and all these previous reparations
were repaired so the tail is strong again, last two images, above.

Three nails go through the tenon 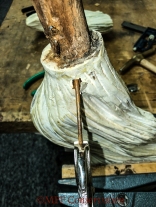 Excavation involved removing the nails from the tenon.
Spiky nail-spines created tension but did little in actually holding the tail fast in its joinery.  These nails later repairs, not original. 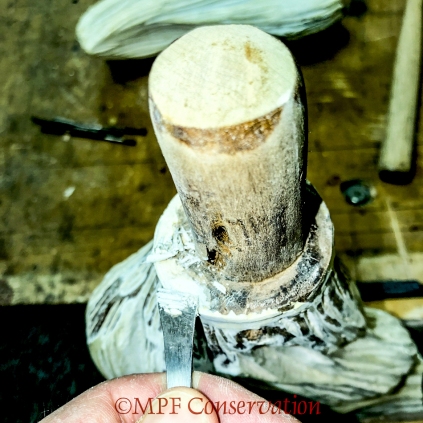 The tenon rim is leveled and cleaned.

Nail holes are drilled for a clean hole. 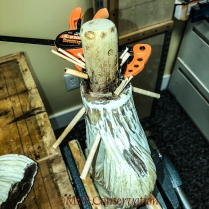 Dowels are inserted into the holes. 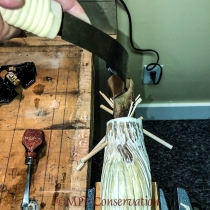 The dowels are trimmed. 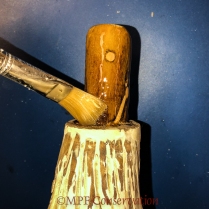 We wrap hide glue soaked veneer around to enlarge the tenon. 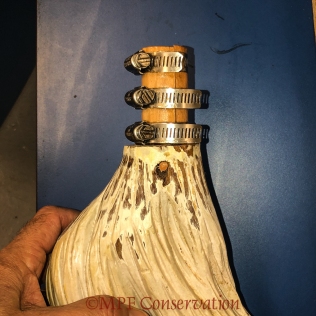 The tenon is set to cure.

The tenon is complete.

All the holes in the tail mortise were filled in order for the repairs to move forward.
The tenon must be as strong as possible before it is placed back into the mortise with as small as possible gap margin between the tenon surface and the mortise wall, so that adhesion between the two surfaces is not based solely upon the strength of the glues,
but also from adjoining component tension.

Holes were drilled clean, and hardwood dowels were placed through the holes for snug fits.  We used hide glue to secure the dowels.
Hide glue can be loosened with warm water, direct heat, or vinegar, if necessary, allowing for the reversibility of work performed possible by future restoration efforts.

These are left to cure overnight, and trimmed to historic levels.
The tenon was sized into the mortise (concurrently repaired, shown next).
The mortise, due to degradation and damaging repairs,
needed to be augmented by doweling, splines and veneers, then
rebored before inserting the repaired tail tenon back into the mortise. 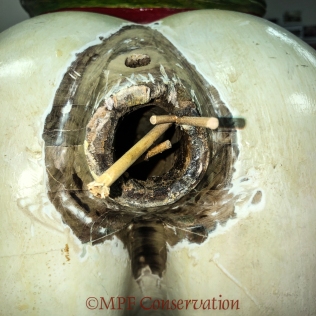 As with other parts, the ragged nail-holes are drilled then coated with glue and filled with dowels

Dowels are trimmed after glue cures.

The same nails that went through the tail tenon entered the tail mortise, leaving holes.
These were filled in a similar manner as the tenon.  Nail holes were drilled clean of splintering debris, and hardwood dowels were inserted through the holes,
glued with hide glue, and left to cure before trimming.
Debris was thoroughly cleaned from the inside mortise walls.
This is shown in the first two images above.

The dowels are trimmed to surface then the mortise is cleaned with a drum sander bit.

Segmented dowels are fashioned to fit into damaged mortise then glue is mixed to coat dowels. 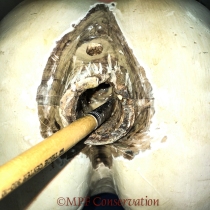 Dowels are snugged into voids in mortise then shimmed to create contact pressure during glue cure.

The mortise was also repaired through the use of a larger dowel system.
Unfortunately, the mortise walls were crumbling.
The mortise was drilled cleanly, a bit larger than the crumbling walls, and fitted with hardwood dowels using hide glue amended with gap filling agents, above.

Repaired tail tenon being checked relative to proper angle of mortise for the rebore.

The first step in the mortise reboring phase is using a hole saw bit to establish the proper trajectory of the mortise walls.

The trumpet bell shape of the outer mouth of the damaged mortise having been amended with veneer and splines of hardwood, glued, then cut flush with mortise entrance using a Japanese kerfing blade.

Amended mortise entrance being smoothed with a drum sanding bit. 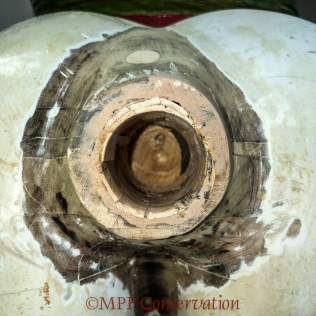 After curing, the restored tail tenon was measured and a fresh mortise was
drilled in the proper angle and size to accept the repaired tenon, above, while taking into account the orbit and trajectory of what was left of the original mortise path.

Because multiple sections of the mortise wall were asymmetrical and trumpet shaped, its depth and trajectory needed amending.  This process was a several-part endeavor which encompassed at least eight individual steps which often overlapped the previous step.

The screw bore-hole which secures the tail tenon to the rump structure must be repaired. 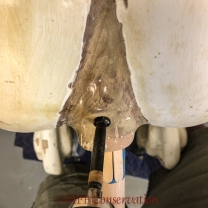 The screw hole is drilled for a new plug. 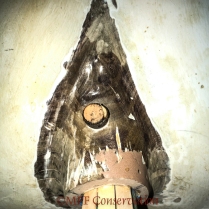 The hardwood plug is set deep into the hole, glued with hide glue, and set to cure. 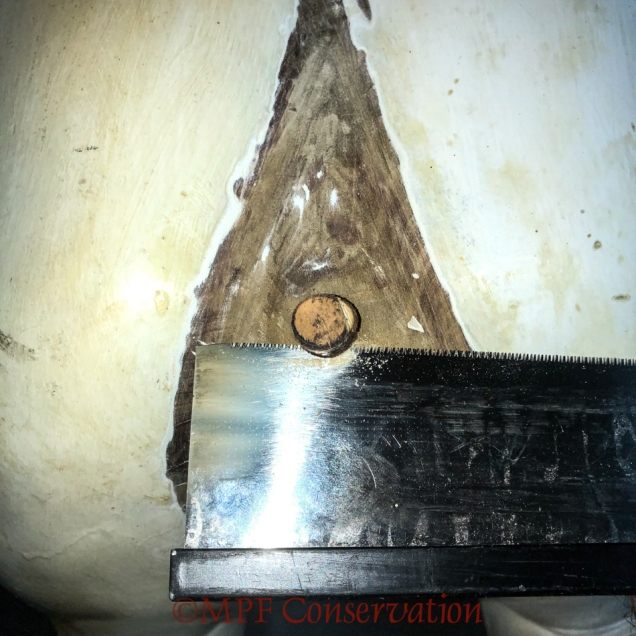 Hardwood plug is cut to historic levels and shaped.

The original screw hole was repaired: drilled clean, filled with a dowel,
and readied for the screw to be replaced again. Later in this process the fresh plug was redrilled to countersink a large stainless steel screw which bisected the tenon (as was originally designed) and anchored into the rump block below the tail tenon.

The mortice walls are degraded and full of debris 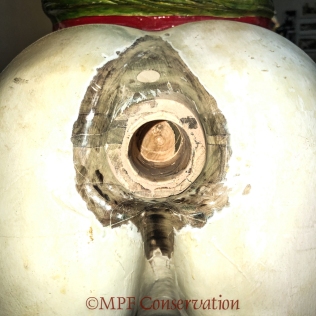 Mortice walls are restored, waiting for the tenon!

Above, the restored tail mortise, before and after!

Follow us for updates on the happenings at the stable!
We will continue to take you behind the scenes!  Currently we have:
Jantzen Beach Carousel Moving Day!
The Jantzen Beach Stable is Full!
Good Monday Morning!
and many others!
To keep abreast of our post, follow us here or
on Instagram (@mpfconservation) or on Facebook !

Written by Kate Powell  ©MPF Conservation.
May be printed for your own use ONLY, not for use on blogs without permission.

We are a conservation and restoration firm located in the Pacific Northwest, specializing in objects: furniture, but also other objects; wood, stone or metal furniture or objects; lacquered and painted furniture or objects; traditional finishes on furniture or objects; quilts, beaded objects, and some textile reparation and interior architectural elements, such as leather or upholstered walls. When you think about conservation, equate it to restoring the furniture or object the best way possible for the history, life and value of the object. We are fully qualified to perform museum-tectbook treatments, but also flexible enough to work with private clients to allow for daily use of objects. We work West of the Rockies from Canada to Mexico, and once in a while venture beyond the West for specific treatments. Kate and Mitchell Powell are partners in work and in life; we each have our specialties in work and in our marriage. Mitchell is the cat charmer in both! To see our work visit our official website: http://www.mpfconservation.com
View all posts by MPFConservation →
This entry was posted in antiques, art, conservation techniques, decorative motifs, Interim Report, painted objects, preservation, process, reparation, restoration techniques, wooden objects and tagged #antiquecarousels, #carouselhorses, #carouselrestoration, #cwparker, #cwparkercarousel, #historiccarousels, #horse, #jantzenbeachcarousel, #jumper, #mpfconservation, #nwportland, #objectconservation, #paintedobjects, #parkercarousel, #patriotic, #patrioticjumper, #polychromeobjects, #portlandoregon, #restoreoregon, #woodrepairs, C.W.Parker carousel, carousel, horses, Jantzen Beach Carousel, object conservation, painted objects, polychrome, restoration, Restore Oregon, wooden object conservation. Bookmark the permalink.