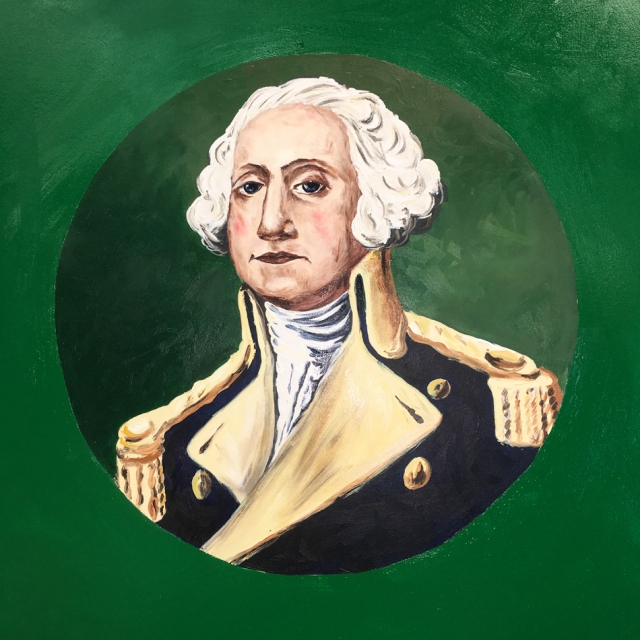 We left off with the finished drafts on paper, above. 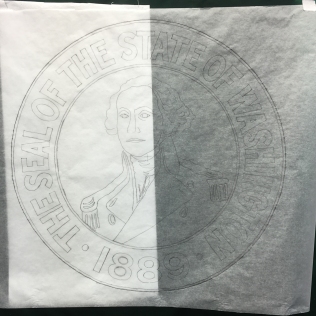 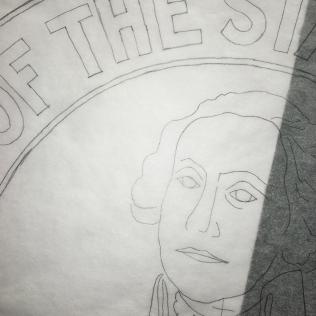 New tracings from our master tracing are created each time so the tracing paper
doesn’t wear and the marks are fresh, not fat and sloppy. 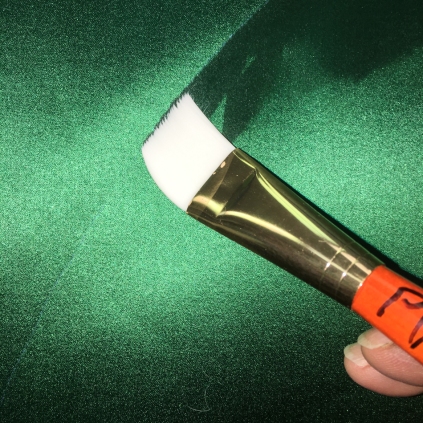 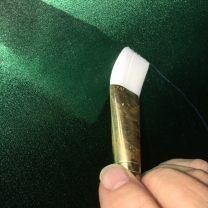 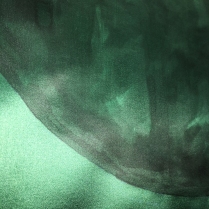 The historic flag was originally primed in its entirety.
We think it created problems.
Many artists and creators of historic pieces don’t think about what will happen
to their works in 100 years… they are in the moment plying their trade.

Mitchell and Dave Bernard (Gamblin) and I discussed this several times.
Each time, we decided that some of the aging issues including some of the cracking
with the original flag may have occurred due to the stiffness of
the primed silk folds pulling on the oil paint medallion of George Washington.

For that reason, we decided not to
prime the entire silk flag.

It means my painting must be spot on, in order that there is no oil paint hitting any portion of the silk that is not primed, because the oils in the paint will spread out
and leach into the silk (think of a grease spot.)  To assist me a bit in that area,
I am allowing about an eighth of priming beyond the edge of the medallion, just to be safe.
That will save me from a teeny slip of the brush.

Also, when tracing, it became clear that the blue tracing paper does not work as well as
the white chalk paper — the blue doesn’t hold, yet oddly, embeds into the silk.
It won’t brush off easily if it falls onto the silk field.
Doesn’t make sense, but that is my experience. 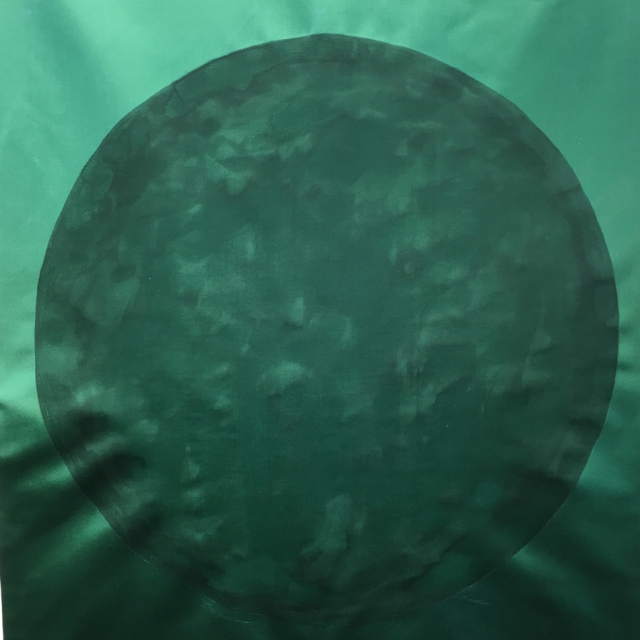 I also learned something from being a bit sloppy in my pinning,
and it is a test of my patience, which is one of my worst downfalls.
Pinning is important.  Lots of evenly spaced pins.
I didn’t use enough silk pins on the draft and one of the test sheets
puckered horrendously during the priming process!
Not the little bit you see here, but large stiff puckers sending out waves.
This will not come out! 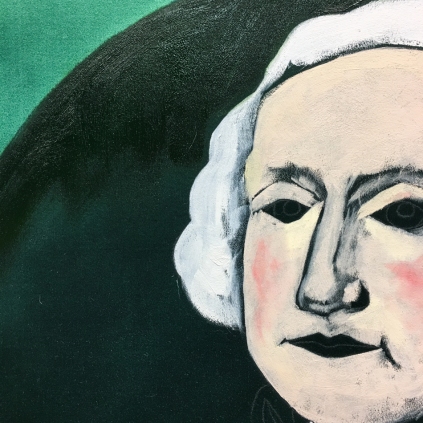 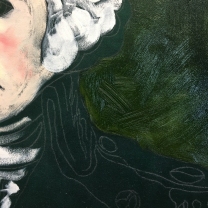 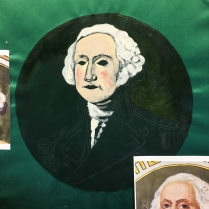 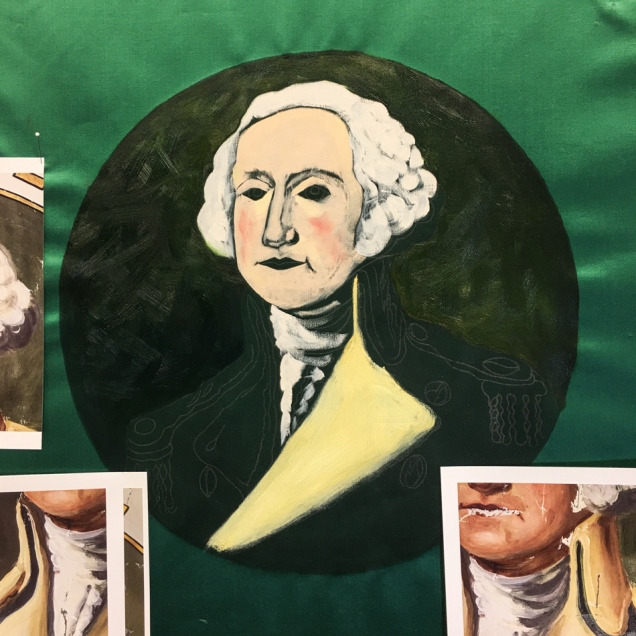 I began painting George again, on the silk.
I am writing this in hindsight, but I was still a bit timid painting on silk.
I didn’t blend as I should have — I used the oils more like acrylics.

I painted thus far then stopped and let it dry.

It is an odd feeling that I must get used to,
painting on a surface that is fluid and can move ever so slightly.
It doesn’t have the stability of paper. 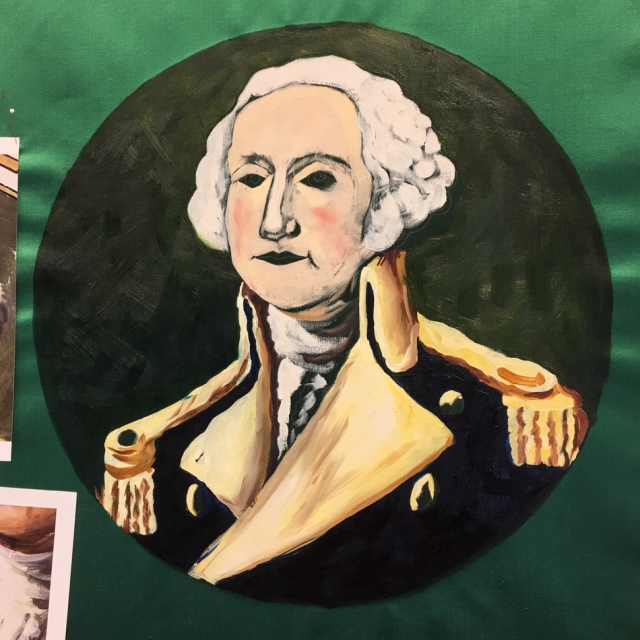 Note: if the image colors are darker or lighter, it is just the images taken under
different lighting at different times of the day.

I started again, this time ready to paint more in one sitting.
Hey, I was getting used to painting on a fluid moving material!
I moved into his uniform… 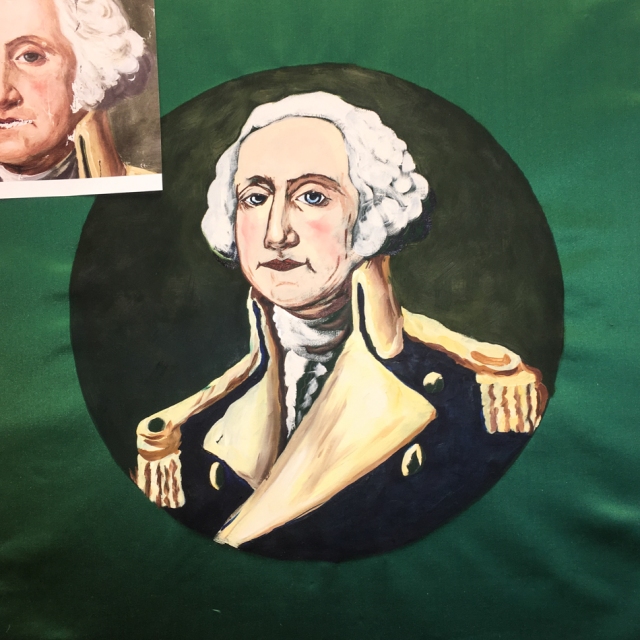 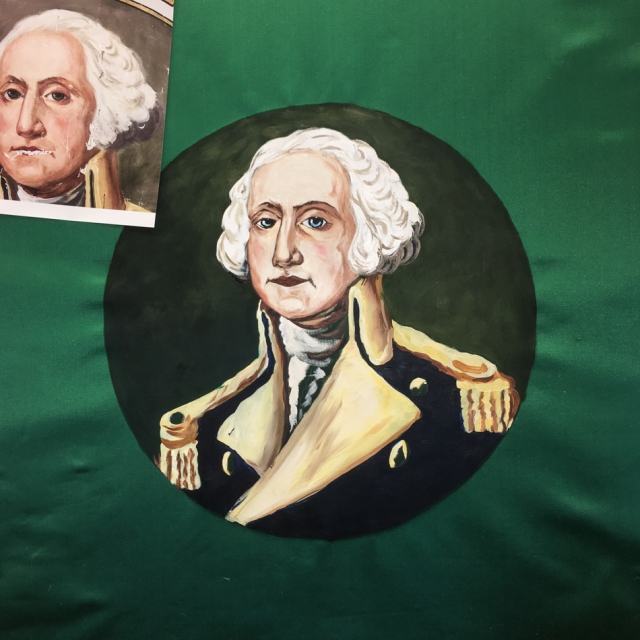 And finally, in one sitting, I fleshed George out, so to speak.
Shaded his skin tones and hair…

I have a bit more to do, but am ready for the next step, the last set of drafts,
where I paint the drafts as I will paint the final flag, in 3-4 sittings:
1) White circle;
2) Lettering and background and George, basically;
3) Details. 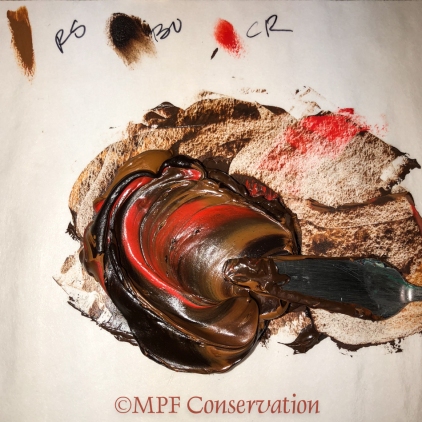 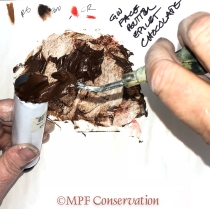 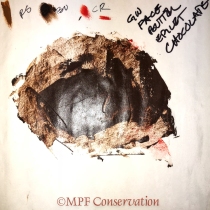 In preparation for the next step, I mixed a dozen convenience colors from the palette
I developed for George, and these can be changed slightly as I am painting.
Paints are mixed then placed in tubes and sealed.
This one looks like chocolate fudge! 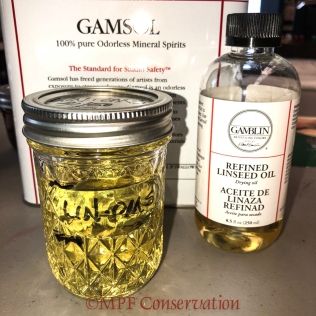 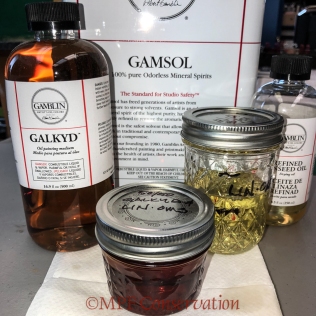 I also mixed up the mixture I am going to use to thin the paints,
so it is ready for my brush to be dipped into as I paint.

I am ready to paint the last set of drafts, next post!

To begin at the beginning, visit Washington State Flag, 1.